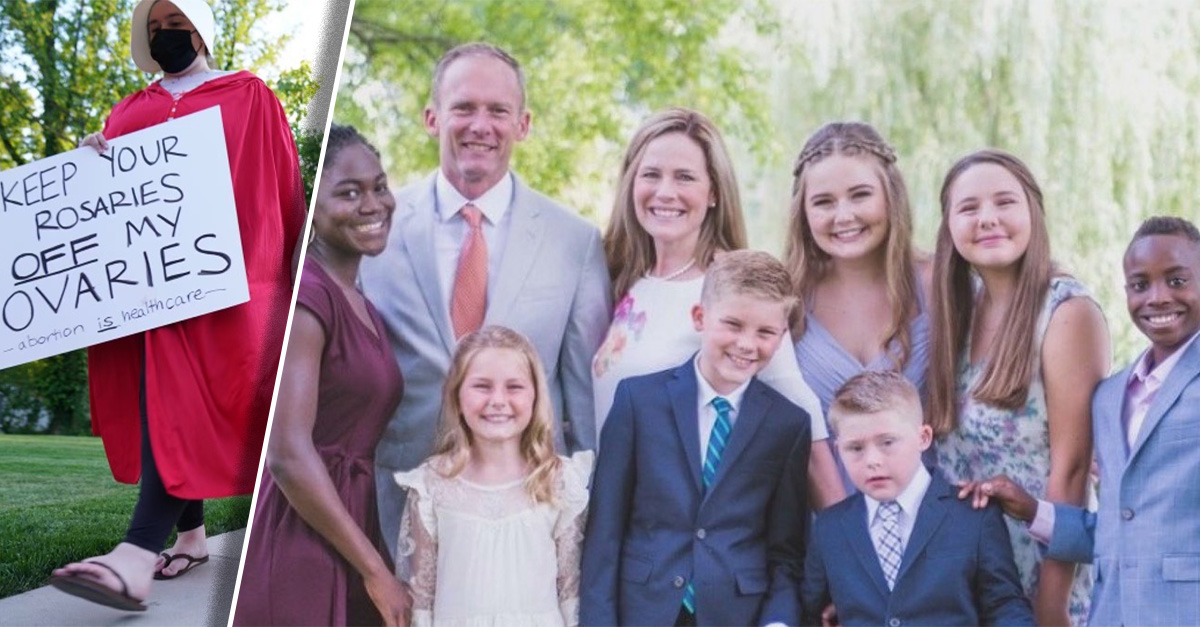 Outside the home of Justice Amy Coney Barrett, women (and one man) donned in costumes from “The Handmaid’s Tale” circled the cul-de-sac to protest Barrett’s impending decision in Dobbs v. Jackson Health that is expected to have huge implications on abortion rights.

Barrett is one of five Supreme Court justices who have allegedly, and likely, signed onto the opinion of the Court drafted by Justice Alito, a draft of which was leaked in a bombshell report by Politico on Monday, May 1.

The leaked draft opinion of the Court, which has been deemed authentic by Supreme Court officials, would completely overturn Roe v. Wade and return the power to regulate abortion to the states as it was before the 1973 Roe decision.

The Handmaid’s Tale cosplayers were very quiet and only spoke when spoken to.

The Standing for Freedom Center’s John Wesley Reid asked one woman, Cassandra, why she thinks a woman of all people would want to take away women’s rights.

Cassandra began by suggesting that Barrett’s religion is the basis for her legal reasoning.

The unsubstantiated claim neglects to note that besides Dobbs v. Jackson (the current case threatening Roe), Justice Barrett has yet to rule on an abortion case. Thus, one cannot suggest that her decisions will be faith-infused since there exists no evidence that she has allowed her faith to supersede the Constitution in the past on matters of abortion. Her opinion on Dobbs has yet to be released.

It should also be noted that Justice Sotomayor, arguably the anchor for the Court’s left bloc, identifies as Catholic and will by no means support a Roe overturn.

Cassandra then stated, perhaps hastily, that Barrett’s decision could be influenced by the fact that she has adopted children and not experienced childbirth.

“It’s also possible that the fact that she is an adoptive mother is influencing her inability to see what it’s like to carry a pregnancy to term.”

Barrett did adopt two children but she has also given birth to her five biological children.

This is just the latest instance of Supreme Court justices having their homes picketed. On Monday evening, for example, a crowd of nearly 200 rallied at Justice Alito’s house with signs, candles, and extremely vulgar chants. Alito and his family were vacated to an undisclosed location days before the protest.

Despite the loud vulgarities, a light-in-darkness moment occurred when a neighbor was heard playing “Tis So Sweet to Trust in Jesus” on her piano with her window open.