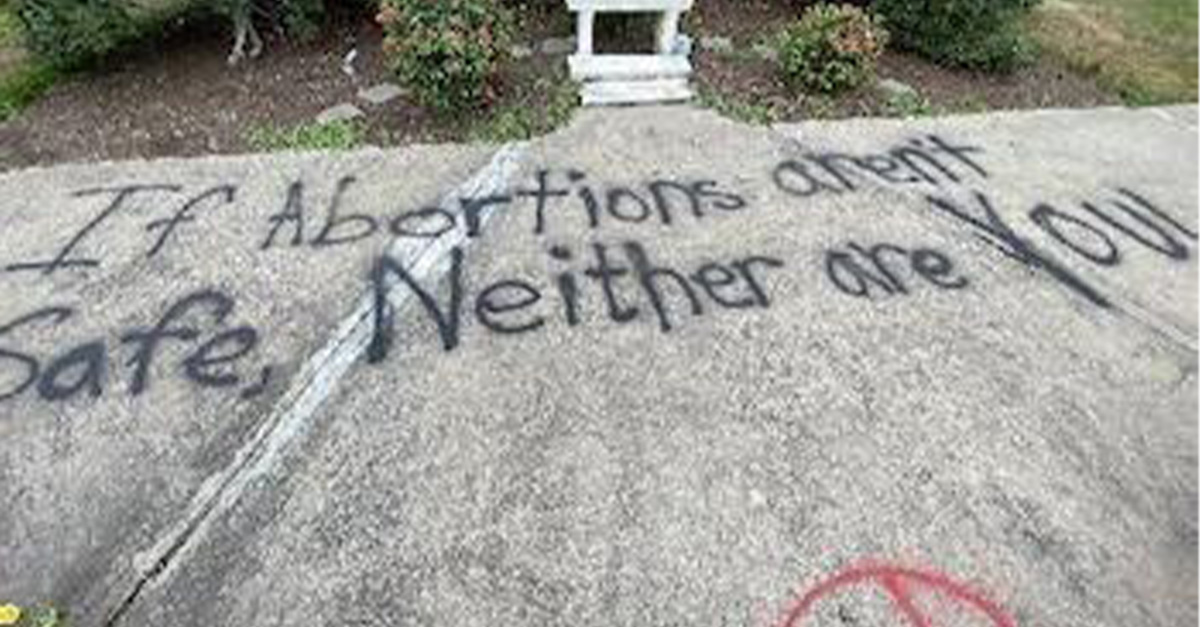 Another crisis pregnancy center, this one run by Catholics, has been targeted with vandalism from pro-abortion zealots, who again threatened: “If abortions aren’t safe, neither are you.”

Bethlehem House, a crisis pregnancy center in Easthampton, Massachusetts, was vandalized last week, The militant pro-abortionist group, Jane’s Revenge, took credit for the attack by spray-painting its own name on the site, as well as anarchist symbols and its aforementioned signature warning.

Bethlehem House provides financial support and resources for mothers, as well as single fathers, such as providing diapers, car seats, blankets, clothing, and more. The volunteer organization also gives new mothers a basket filled with $500 worth of items. Pam Hibbard, the director of Bethlehem House, said, “To be vandalized for giving out diapers, that‘s a bit much.”

She explained, “All we‘re doing is trying to help families, moms, new moms, moms that might have a baby already, or a couple of children already and this is their third child, whatever it is, it could be their 10th child, we help people who are doing God’s will in having the baby. And He’s the one that gives life.”

The attack is just the latest in a wave of attacks on crisis pregnancy centers and churches coinciding with the Supreme Court’s decision in Dobbs v. Jackson, which returned the issue of abortion to the states. The messaging attached to the attacks stays consistent with the online communiques from Jane’s Revenge, a loosely connected group of terrorists that has demanded for all crisis pregnancy centers, which it calls “fake clinics,” to be shut down. In one of its online posts, the group wrote,

“From here forward, any anti-choice group who closes their doors, and stops operating will no longer be a target. But until you do, it’s open season, and we know where your operations are. The infrastructure of the enslavers will not survive. We will never stop, back down, slow down, or retreat. We did not want this; but it is upon us, and so we must deal with it proportionally. We exist in confluence and solidarity with all others in the struggle for complete liberation. Our recourse now is to defend ourselves and to build robust, caring communities of mutual aid, so that we may heal ourselves without the need of the medical industry or any other intermediary. Through attacking, we find joy, courage, and strip the veneer of impenetrability held by these violent institutions.”

The post calls for others to engage in attacks. Interestingly, it makes the claim that crisis pregnancy centers “impersonate healthcare providers in order to harm the vulnerable.” This is a false claim that has been repeated by politicians. In fact, many of the group’s claims match rhetoric espoused by politicians including Massachusetts’ own Sen. Elizabeth Warren, D, and Attorney General Maura Healey.

Healey recently issued a consumer advisory about the centers, saying they “do NOT provide comprehensive reproductive healthcare” and are “NOT licensed medical facilities.”

She explained, “While crisis pregnancy centers claim to offer reproductive healthcare services, their goal is to prevent people from accessing abortion and contraception. In Massachusetts, you have the right to a safe and legal abortion. We want to ensure that patients can protect themselves from deceptive and coercive tactics when seeking the care they need.”

When pro-lifers want to ban abortion, pro-abortion advocates say that they only care about women and babies before birth. When pro-lifers establish thousands of crisis pregnancy centers where they show that they care about women and babies after birth by providing free resources and helping them to raise their babies, pro-aborts say they are fake clinics who torture women. Only the left could take the act of handing out free car seats and call it enslavement.

Crisis pregnancy centers provide a great service to young mothers and this image of them as insidious plotters who draw in women with promises of abortion only to trap them and force them to have a baby would be embarrassing if it weren’t taken seriously by so many. Crisis pregnancy centers do not give the impression that they will perform an abortion — check their websites. The staff and volunteers at Bethlehem House are upfront on their pro-life beliefs on the center’s homepage, which in large letters states that “life begins at the moment of conception!”

Even if a woman goes to a crisis pregnancy center thinking that she will receive an abortion, she will quickly learn otherwise. These organizations, by virtue of their Christian principles, would never engage in deception.

The vast majority of women who go to a crisis pregnancy center will opt to have their baby, but 96.9 percent of women who visit a Planned Parenthood will have an abortion. It isn’t crisis pregnancy centers who are deceiving women, it’s the abortion clinics who say that murdering your child is healthcare and who try to convince women that their only option is to have an abortion. Earlier this year, an undercover video showed a nurse at an abortion clinic in Washington D.C. insisting that a woman had to take a Xanax and be undressed before the doctor would come in and address her concerns about the procedure.

The lies of pro-abortion politicians and pro-abortion groups have helped lead to the violence and intimidation against crisis pregnancy centers and churches. They have convinced people that pro-lifers really want to enslave women, that giving birth is too dangerous, that crisis pregnancy centers deceive women, and that it is pro-lifers who are anti-choice and violent. But who is really committing violence — the one who hands out baby blankets or the one who firebombs their building?

John 16:2-3 says, “They will make you outcasts from the synagogue, but an hour is coming for everyone who kills you to think that he is offering a service to God. These things they will do because they have not known the Father or Me.”

Jesus’ words to His disciples came true as the Jewish leaders, as well as the Romans, used violence to try and stop the spread of Christianity. Pro-abortion advocates sometimes even use religion as a reason for why abortion should be legal. Others may worship the god of self, seeing any limitation to their future freedom and fun as an affront. Thankfully, the violence towards churches and crisis pregnancy centers has not resulted in physical harm to any person yet, but that day may come.

It is essential that our leaders not only condemn these actions but admit that they were wrong with regard to crisis pregnancy centers and the intent of those who oppose abortion. Unlike the left, pro-lifers don’t believe that words are violence; however, the continual demonization of those who disagree with killing children has led to violence and may get worse.

No matter what, though, Christians must be prepared for this hate and continue our mission in love. 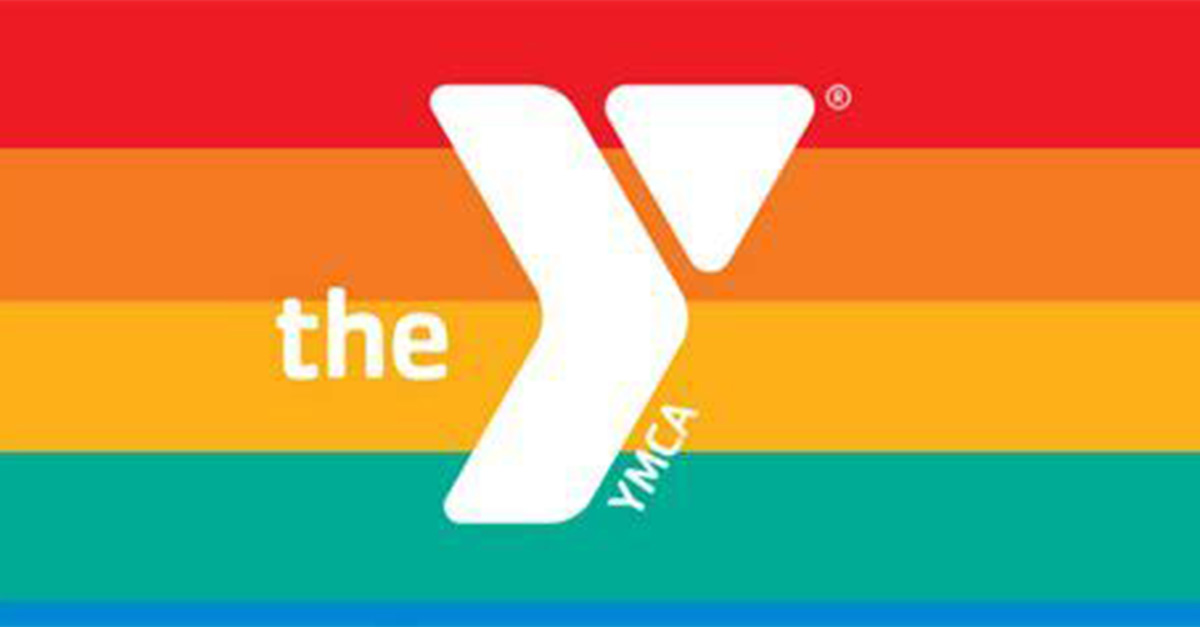 The YMCA, citing its ‘Christian’ values, bans an elderly woman who objected after discovering a man in the women’s locker room