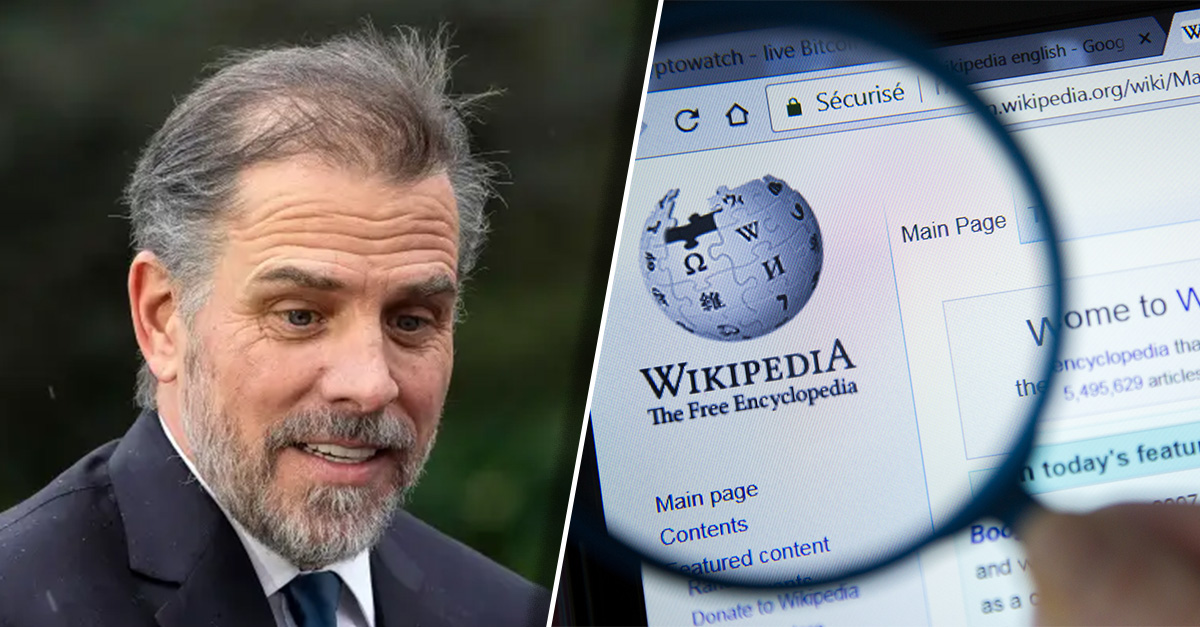 During a week when free speech and Big Tech censorship have been hot topics of discussion, the online encyclopedia Wikipedia chimed in by fully deleting its article on Rosemont Seneca Partners, the company co-founded by Hunter Biden that is currently a focus of an investigation into his financial dealings.

Wikipedia removed the page last week and confirmed it this week, saying that the article was “not notable.” An editor referred to as Alex (no last name provided) explained, “This organization is only mentioned in connection with its famous founders, Hunter Biden and Christopher Heinz.” He claimed that keeping the article in place risked making it, “a magnet for conspiracy theories about Hunter Biden.”

The article was very limited, yet the reasoning behind removing it has raised questions. George Washington University law professor Jonathan Turley wrote about Wikipedia’s decision, noting that the timing was strange considering the investigation surrounding Hunter Biden. “The bias in the reference to the ‘conspiracy theories’ is glaring. While some clearly misstate the facts of the Hunter Biden dealings (on both sides of the controversy), the central role of the company in these dealings is no conspiracy theory. I have long criticized Hunter Biden and his uncle for engaging in raw influence peddling — a practice long associated with the Biden family.”

He added, “I have also been highly critical of how media and social media companies killed the Hunter Biden story.  Much like Wikipedia’s explanation this week, they claimed the Hunter Biden laptop story was merely conspiracy theories and Russian disinformation before the election. We are now approaching the midterm elections and suddenly Wikipedia is killing the page on this key company.”

Alex’s comments are indeed odd considering that this company is a focus of the investigation, which has been heating up this year. The Wall Street Journal wrote that some familiar with the investigations, “said the prosecutors have also focused on how he received money from Burisma and other sources, including via Rosemont Seneca, a Delaware entity that received some of Hunter Biden’s earnings and did some of his spending.”

As an example, a banker from Kazakhstan wired $142,300 to Rosemont Seneca, which was used to purchase a Fisker electric car to be owned by Rosemont and used by Hunter Biden. A former associate said Biden later traded the Fisker for a Porsche. In 2013 Rosemont Seneca entered into a business partnership with Chinese fund Bohai Capital. Prosecutors have focused on payments Biden received from Burisma which went through Rosemont Seneca Bohai LLC.

The Wikipedia page removal also comes at a time when news surfaced that Eric Schwerin, president of Rosemont Seneca, met with then-Vice President Joe Biden at the White House during the Obama administration and also had multiple visits with other staff members. This has critics doubting the elder Biden’s claim that he did not know about his son’s business dealings and never discussed his overseas business ventures.

“Not everyone gets to meet the Vice President of the United States in the White House. The press should be asking why Hunter Biden’s business associates — like Eric Schwerin — had that privilege and were given access to the Obama White House,” said Sen. Ron Johnson (R-Wisconsin). “This is additional evidence that Joe Biden lied when he said he never discussed Hunter’s foreign business dealings. It’s well past time for the corporate media to demand the truth from Joe Biden. The corruption of Biden Inc. must be exposed.”

The claim that the investment group isn’t “notable” is patently false as any observer can see. Wikipedia contains nearly 6.5 million articles in English alone on topics both obscure and famous, ranging from FDR’s fireside chats to the 1980s Brat Pack movie “St. Elmo’s Fire” to the as-yet-unsolved 2012 explosions in Dnipropetrovsk, Ukraine, to a list of Japanese supercentarians to the etymology, history, controversies, applications, and maintenance of rubber tires (not to be confused with the page detailing the 1927 silent film “Rubber Tires”). According to Wikipedia’s business model and everyday reality, effectively everything is potentially “notable.”

It’s not the job of a Wikipedia editor to protect the populace from content because they might use it in a nefarious or unintentionally harmful way. It appears much more likely, as Turley noted, that the Rosemont Seneca page was removed to prevent people from learning about the group. Oh wait…does that sound like a conspiracy theory?

Censorship doesn’t protect the public, it protects a select few. It doesn’t prevent conspiracy theories, it only promotes distrust. At one time, the idea that COVID leaked from a Wuhan lab was considered conspiratorial, yet that turned out to be a credible possibility. Copernicus was labeled a heretic for saying the Earth revolved around the Sun. People don’t need unknown tech employees to protect them from so-called “misinformation.” They only need full access to a free flow of information so they can then decide for themselves what they should or should not believe.

What happened during Supreme Court arguments in the case of the football coach fired for praying?