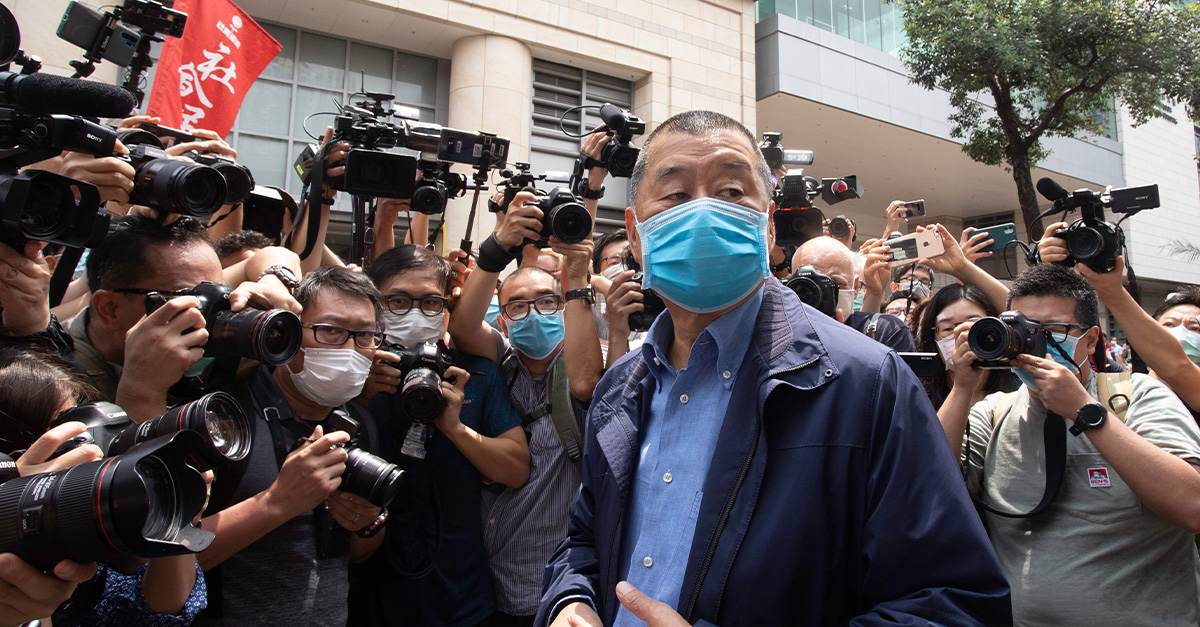 Jimmy Lai, a Hong Kong newspaper tycoon and outspoken critic of the Chinese communist regime, has been convicted over his role in a 2020 vigil for the victims of the Tiananmen Square massacre and will spend the next 14 months in prison.

Lai, a prominent Hong Kong businessman, media mogul, and Christian, is arguably the most well-known figure from the unique autonomous region’s tumultuous pro-democracy protests in 2019. He is also the founder of the independent newspaper Apple Daily, which was forced to shutter its doors earlier this year after its headquarters were raided by Hong Kong police. Its assets were also frozen and several of its executives, financial backers, editors, and a journalist were arrested.

The protests largely went silent in 2020 due to both the COVID-19 pandemic and the implementation of a controversial national security law that forced the movement into virtual silence, with some activists resorting to holding up blank placards after several pro-democracy slogans were banned. Since then, numerous other pro-democracy activists have been arrested.

Hong Kong has historically held the largest vigil to mourn the victims of the bloody Tiananmen Square massacre of 1989, during which thousands of student protesters were gunned down by soldiers and run over by tanks at the direction of Chinese Communist Party (CCP) leaders.

The event was banned by the Hong Kong police in 2019 and 2020, a directive since made permanent.

On Dec. 9, Lai, along with several others, was found guilty of unauthorized assembly of the Tiananmen Square vigil held on June 4, 2020. Lai was charged with “inciting” others to attend the memorial service. Several other organizers were also arrested, including Chow Hang-tung, a civil rights attorney and former opposition leader, and activist Gwyneth Ho, who were convicted for “unlawful” and “unauthorized” assembly.

The judge in the case, Amanda Woodcock, who has presided over the convictions of other pro-democracy activists, used the COVID-19 pandemic to justify the convictions, saying that Lai and other defendants “ignored and belittled a genuine public health crisis” and “wrongly and arrogantly believed” in commemorating an event rather than protecting the health of the community.

Kyle Ward, deputy secretary general for Amnesty International, blasted the Hong Kong government in a statement. “The authorities have deemed the vigil ‘unlawful’ because the police did not approve it, but peaceful assembly does not need government approval. These convictions merely underline the pattern of the Hong Kong authorities’ extreme efforts to exploit the law to press multiple trumped-up charges against prominent activists.”

These are words stated from convictions rooted in the Western-style civil rights that Hongkongers had enjoyed and grown to deeply identify with during their nearly 100 years as a British colony and have tried to hold onto in the decades since the island was returned to China.

Beijing initially promised to let Hong Kong continue with its Western-style liberties and civil liberties, but President Xi’s national rejuvenation and an increasingly overt return to the communist nation’s tyrannical past has seen China slowly infiltrate the Hong Kong government and tighten its grip on its citizens. Over the past few years, the regime hasn’t even tried to hide its determination to squelch opposition — even if that opposition is displayed via a solemn candlelight vigil for dead students.

The crackdown isn’t just being seen in Hong Kong. On mainland China, prominent figures who dare stray out of the CCP’s favor, like tennis player Peng Shuai, movie star Zhao Wei, and billionaire Jack Ma are disappeared overnight, later to be forced to publicly repent of their sins against the state.

In Hong Kong, a vocal, widespread protest movement that boldly asserted their God-given rights to free speech, free assembly, and a fair justice system guaranteed by the Hong Kong charter was squashed like a bug, with Beijing using deceptive tactics to swiftly overrule autonomy and eliminate legitimate civil rights.

Members of the global community — while hollowly virtue-signaling their disdain for China’s treatment of its citizens, the people of Hong Kong, and the Uighurs and other religious and ethnic minorities, as well as its threats against Taiwan — have largely stood by, perhaps in no small part because in many of our own Western, purportedly liberal nations, the ruling elite are strong-arming their way into also overriding basic civil rights and the systems of self-governance that are meant to protect us from a tyrannical government.

One last note: As a well-connected billionaire, Jimmy Lai had every financial resource and opportunity needed to flee Hong Kong and make a free, safe, and prosperous life for himself. Instead, he refused to abandon his people, his country, or his commitment to liberty, and for that this Christ follower deserves to be recognized and honored as not only a hero of freedom but also a hero of the Faith. May God watch over him and keep him safe and strong as he continues to serve his country, his cause, and his Savior.

The Supreme Court allows the Texas heartbeat law to stand, while letting some legal challenges to it move forward