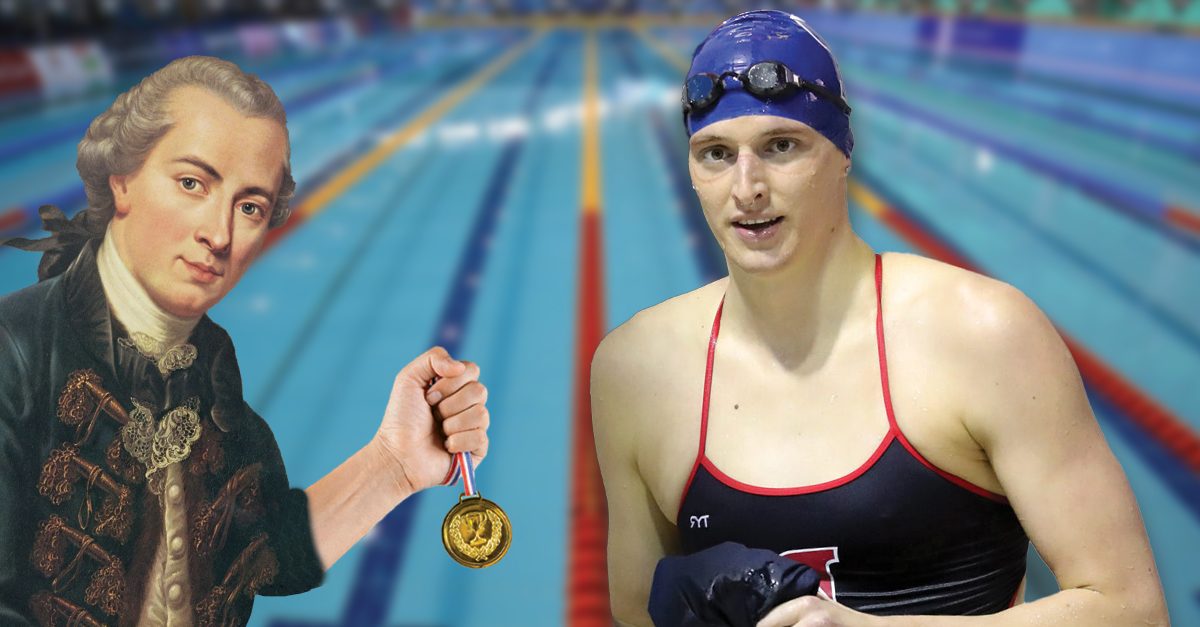 To any sane observer, February’s Ivy League swimming championships looked like a scene from some alternate universe.

Lia Thomas, formerly known as Will, competed in the championship and found great success only granted to those rare female athletes with the gift of actually being men. This was no surprise, given the nationally recognized success rates that male-gone-female athletes have had competing with actual women. In fact, Lia, a senior at the University of Pennsylvania, went from placing in the 400s in men’s placement to #1 in women’s placement, according to a letter of concern penned by his fellow female athletes protesting the unfair competition.

Lia was joined in the pool by Iszac Henig who, despite identifying as a man, has continued swimming on the Yale women’s team. Iszac even strolled around the pool in a men’s swimsuit.

In this case, the emperor literally had no clothes.

One could easily look at Lia, Iszac, and their woke supporters and write them off as irrational. But what if their worldview is actually deeply rational? What if the problem is not that they think too little, but too much? In fact, I see today’s transgender movement as the natural consequence of one of the greatest overthinkers in human history: Immanuel Kant.

As one of the last and most influential philosophers of the enlightenment, Kant was adamant never to believe anything unless he could fully prove and understand it. Thus, he developed a very strict definition of knowledge which excluded anything that the mind couldn’t fully grasp.

Kant observed that all information of the world outside us comes from our five senses. But the senses only provide raw data: light, color, shape, sound, etc. The mind is what makes sense of all this data and rearranges it into something with structure and order: sunlight, buildings, trees, etc. Kant’s big question was how the mind knows the right way to arrange things. He concluded that the mind’s rules of order can’t come from the raw data of sense experience. They must come from the mind itself. So, in Kant’s view, the material world is unknowable until the mind imposes meaning and order on it.

Kant caused a seismic shift in the way people see their relationship to the world. No longer did the mind have to agree with reality. Rather, reality had to agree with the mind. Thus, Kant fielded a war between the human mind and the material world. That war is ongoing.

Its current battlefield is transgender ideology.

Seen through a Kantian lens, the transgender worldview makes a good deal of sense. If the material world is just the raw data out of which the mind constructs an ordered reality, then our very bodies are merely a canvas for our mind. Of course, the canvas isn’t quite blank. Biological sex is a stubborn stain upon said canvas, but it can be painted over, according to this logic. Further, if one is painting over biological sex, why stop at only two genders?

Hence the ever-expanding array of genders (and even species) we are supposed to believe in.

In fact, it makes sense that the woke have developed a myopic focus on rearranging their bodies. A tense question in Kantian logic is how social groups can agree on the structure of reality. If material order is constructed by the mind, whose mind gets the final say? Transgender ideology answers that whatever else is true, every person has absolute and unquestionable jurisdiction over their own body, even to the point of rewriting its biology.

According to Kantian logic, as applied by the woke community, it is a human rights violation to say that a man who thinks he’s a woman is still a man. If thought determines material reality, and a person’s body is the property of that person’s mind, then you thinking a different reality upon their body is an infringement of their fundamental rights. It could even be called violence.

So, there is some internal logic to transgender ideology. But there’s a catch as glaring as Lia Thomas’ Y chromosome. Despite the focus on individual liberty, the whole system can only be maintained by force.

Lia Thomas’ chosen reality is at odds with all the real females who want a fair chance at winning their sports. It’s further at odds with the untold millions of Americans who believe biological sex is an objective and immutable reality. The only way for Lia to maintain his reality is for some higher power to intervene against these others which contradict it. The Ivy League and NCAA are all too happy to do so. Across the country, various state actors are attempting to do the same.

Thus, the system which was supposed to be based upon pure reason and empower the individual reduces itself to irrational dictates forced upon the many for the sake of the favored few.

It’s Lia’s world, the rest of us are just living in it.

Before every day of the Ivy League meet, as Lia warmed up to annihilate the competition and Iszac sauntered past in a men’s speedo, an announcement was broadcast saying that “hate” towards trans athletes would not be tolerated. It’s hard to say what exactly would have constituted hate. No one dared find out. The whole scene wasn’t exactly like The Emperor’s New Clothes because of course that is a fairy tale and this is reality.

When the Government Plays God: The Threat of ‘Statism’ to Christianity in America