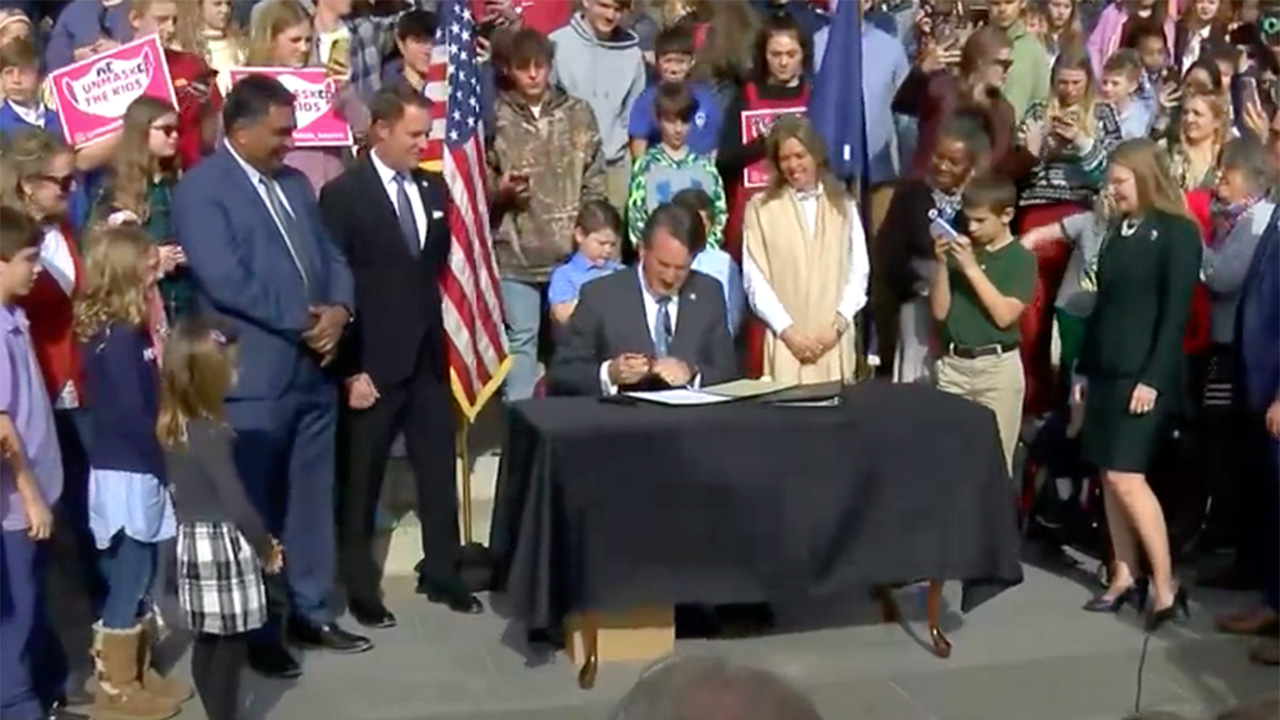 UPDATE: Virginia Gov. Glenn Youngkin today signed into law a bill banning mask mandates in K-12 schools. Passed by the Democrat-led state Senate and Republican-led House of Delegates, the law takes the individual decision on whether or not to mask children on school property out of the hands of school boards and puts it into the hands of parents.

During a signing ceremony attended by parents, children, legislators, educators, and Lt. Gov. Winsome Sears, Youngkin stated, “Now is our chance to give all parents the rights to make decisions that we know they have, but to put it into law….Today, we are reestablishing, restoring power back to parents.”

Normally, all new laws in Virginia go into effect on July 1, but Youngkin will fast-track the mask ban on an emergency basis, making it effective immediately, though schools will have until March 1 to fully comply.

Virginia Gov. Glenn Youngkin’s legal fight with school districts over mask mandates will soon be rendered moot as the state’s Democrat-led Senate last night passed a bill that, among other things, will require schools to make masking optional, leaving the decision up to parents.

The bill, which would not only ban mask mandates but require schools to permanently provide in-person instruction, passed overwhelmingly on a bipartisan basis. The bill will soon be taken up by the Republican-led House of Delegates, which is expected to pass it and send it on to the governor for signing.

Youngkin, who ran and was elected on this issue, celebrated the Senate vote, calling it a “victory for parents and children.” His administration has said that the bill will be fast-tracked as soon as it’s signed, which means it could be law in less than two weeks.

The legislative move came in the midst of a legal battle between the administration and several school districts in Northern Virginia. The school boards refused to adhere to Youngkin’s executive order, with school officials in Loudoun County even taking steps to suspend students who failed to follow the mandate and threatening to have them arrested for trespassing if they showed up at school.

The school districts claimed that Youngkin’s order is illegal since a state law, which was passed last year by the then-Democrat-dominated legislature, calls for schools to follow CDC guidance. As of today, the CDC still recommends universal masking of schoolchildren and the Biden administration says that it agrees.

The sudden and enthusiastic shift on the part of Virginia Democrats, however, is part of a larger trend to move on from COVID, a movement, likely brought on by the high-profile hypocrisy of party politicians recently caught flouting the mask mandates (and other austere COVID restrictions) they’ve been championing for nearly two years.

One of the worst offenders was Georgia gubernatorial candidate Stacey Abrams, who was photographed without a mask as she sat smiling inside a Decatur elementary school surrounded by a classroom full of masked children, a photograph that went viral on social media and was highly criticized even by her fellow Democrats.

Meanwhile, Michigan congresswoman Elissa Slotkin was photographed attending an event without a mask, despite the fact that everyone else at the event was masked, and California Gov. Gavin Newsom was photographed without a mask while attending an NFL playoff game in L.A. with high-level state Democrats and celebrities, all of whom were also maskless. The actions of these elected officials seem to create the clear impression of a double standard, with one set of rules for the elites and another set for average Americans and their children.

Within 24 hours of Abrams’ political faux pas, several Democratic governors in Connecticut, New Jersey, Oregon, and Delaware announced plans to lift statewide mask mandates in schools by the end of either February or March. In addition, California is dropping its indoor mask mandate for vaccinated individuals, although it will still require schoolchildren to be masked. Likewise, New York Gov. Kathy Hochul, D, announced earlier today that she will lift indoor mask mandates for businesses but not for children attending school. Meanwhile, Massachusetts Gov. Charlie Baker, a Republican, said today that he won’t renew his state’s mask mandate for public schools when it expires on February 28.

New Jersey Gov. Phil Murphy, D, cited the “dramatic decline in COVID numbers,” encouraging the people of his state “to live with COVID as we move from a pandemic to an endemic phase of this virus.”

“Statutory rights have attempted to be bypassed through the issuance of executive orders and emergency rules. This type of evil is exactly what the law was intended to constrain,” Grischow wrote in her decision. Although the state of Illinois plans to appeal, Grischow’s decision will remain in place unless it is overturned by a higher court.

As Youngkin’s election in November showed, parents of all political stripes have hit a breaking point in their frustration with school boards and government officials refusing to listen to their concerns about the negative effects that ongoing masking is having on their children.

Fortunately, what parents have been reporting anecdotally is being increasingly corroborated by peer-reviewed studies showing the sometimes shocking negative effects of constant masking on children, including “a profound deficit in face perception abilities,” and evidence of dangerously high carbon dioxide levels found in the inhaled air of masked schoolchildren in Germany.

In fact, studies over the last two years have consistently showed that masks not only do little to help protect against the transmission of COVID in children, but that the policy is harming children in varied and significant ways. Those studies however, have been dismissed or outright censored by Facebook and other social media outlets.

Jenifer Cabrera, who broke the story on the mask-pathogen report, shared screenshots on social media showing that a fact-checking organization named AFP France reviewed her story after it was posted and determined that it was false; that same day, Facebook added a content warning, threatening that anyone caught sharing this “misinformation” would have their ability to distribute content “reduced.”

Cabrera tweeted in July 2021, “AFP’s ‘fact-check’ simply highlights disagreements between the scientists who conducted the test and other scientists who did not conduct the test. Instead of acknowledging that more study would resolve the dispute, AFP calls the report false. That’s not science, that’s propaganda.”

Unfortunately, the cherry-picking of science has never been about protecting others from the virus but about power. So when COVID authoritarians like Dr. Leana Wen, former president of Planned Parenthood turned CNN COVID expert, does a sudden 180-degree-turn and proclaims that mask mandates and other COVID restrictions can now be eased because “the science has changed,” just know that it’s not science that’s changed, but the polls.

Members of the political elite — and those who support them — are changing their tune only because they are afraid of losing their political power when millions of Americans make their voices known in the 2022 midterm elections. And those Americans are increasingly and loudly demanding an end to the anti-freedom, pro-government policies that have been implemented in the form of COVID-19 mandates and lockdowns.

As the nation experiences whiplash over this sudden political and scientific turnabout, people must stop and take note: What is being exposed in real-time like a slow-motion car crash is the fact that authoritarians and corrupt politicians live and act only by a single constant “principle”: They will do, say, and “believe” anything so long as it advances their agenda and increases their power. 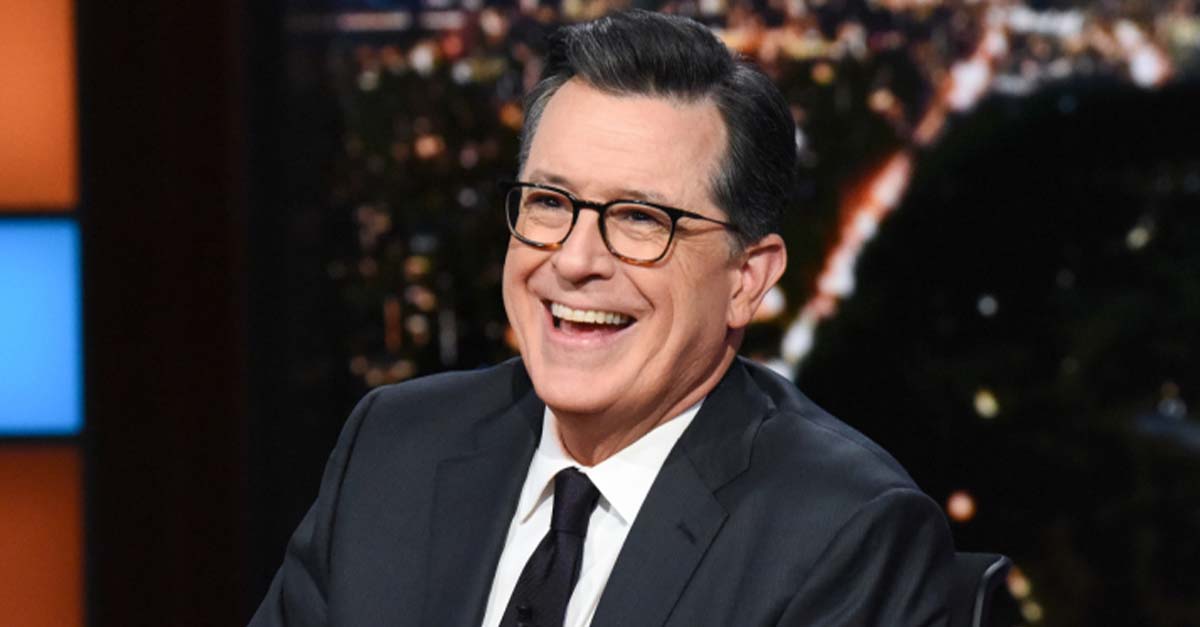 On Tim Keller: Yes, Christians should be gracious to unbelievers, but never at the expense of Gospel truth