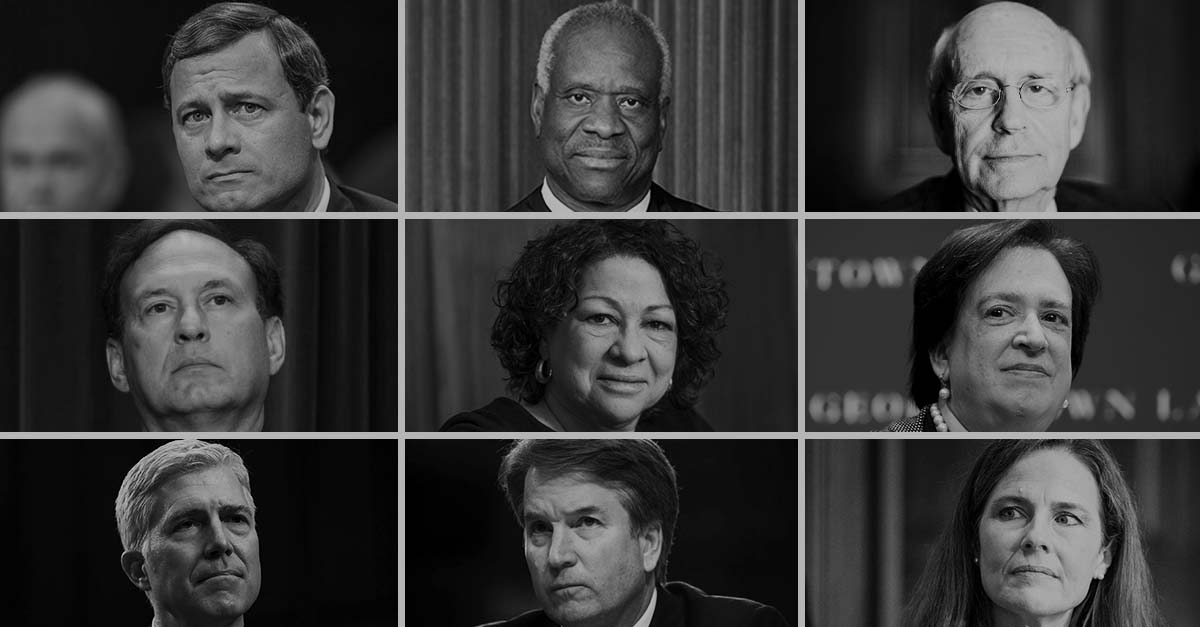 How is each Supreme Court Justice likely to rule in Dobbs?

This analysis is an excerpt from Roe v. Wade in the balance: What you need to know about Dobbs v. Jackson

It is naive to assume that a justice’s ideology will follow their decisions in every ruling and, by extension, an ideological majority should be seen with the same scrutiny. While it’s easy to assume that the right bloc will rule conservative and the left bloc liberal, that isn’t always the case on the ideological spectrum, even with specific issues. How the justices will decide the Dobbs case can subjectively be analyzed based on their prior rulings and personal positions towards abortion.

To be fair, not all of the cases below relate to the viability aspect of Roe and Casey. This arguably renders them irrelevant to the following analysis, except that some of the justices still refer to Roe and Casey in their opinions despite the case’s irrelevancy towards viability. So, even “irrelevant” cases are worth considering.

Listed by seniority, here are the current justice’s voting records and statements related to abortion:

Conservatives have largely coined the Chief Justice as a wild card, given some of his decisions, which, technicalities aside, have not landed on the right, i.e. upholding “Obamacare” in National Federation of Independent Business et al. v. Sebelius, effectively redefining “sex” in the Civil Rights Act of 1964 in Bostock v. Clayton County, among others. Some have gone so far as to call him a liberal. But that logic is self-defeating. That is, to ideologically categorize someone based on the minority of their opinions, what does that say to the majority of their opinions? If a reputably conservative justice rules in ten cases, in which three they take liberal leanings, what is one to say of the liberal justice who votes conservative in three of ten decisions? The conservative court of public opinion would certainly not hail the liberal justice as a conservative.

To be fair, Roberts does push the envelope in general. But on abortion, Roberts has ruled ideologically right in most abortion-related cases before him.

In Carhart v. Gonzales, Roberts ruled in the majority to uphold the Partial-Birth Abortion Act of 2003. He was joined by current Justices Thomas and Alito.

In Whole Women’s Health v. Hellerstedt Roberts ruled in the minority to uphold a Texas law that would require certain restrictions on abortion clinics, such as shorter proximities to admitting hospital care. He was joined by current Justices Thomas and Alito.

In June Medical Services v. Russo, Roberts ruled in the majority against a law that mirrored the law in Hellerstedt. The curious move from the chief justice after he ruled to uphold the similar law in Texas was, in his words, because “the Louisiana law imposes a burden on access to abortion just as severe as that imposed by the Texas law, for the same reasons. Therefore Louisiana’s law cannot stand under our precedents.” Even though Roberts voted to uphold the Texas law in Hellerstedt, since the majority opinion struck it down, Roberts felt that precedent takes priority over reconsideration. This is important to note since the upcoming Dobbs case directly counters the precedent set in Roe and Casey. Roberts may have jurisprudential reason to think that Roe was a bad call, but he also thought that about the Hellerstedt decision, and based his June Medical decision off of the precedent of a decision he dissented with.

In NIFLA vs. Becerra, Roberts ruled to strike down a California law that required non-abortive pregnancy centers to provide abortion referrals. While this case was more about free speech than it was about abortion, the Court ruled on ideological lines. Roberts was joined by current Justices Thomas, Alito, and Gorsuch.

In addition to his rulings, Roberts was the signatory of a 1990 Bush Sr. White House brief that stated Roe was “wrongly decided” and “should be overruled.” Whether this brief may have been more in step with the administration as a whole and not just Roberts is debated. At the time, Roberts was the Deputy Solicitor General. During Roberts’ confirmation hearings both to the D.C. Circuit Court and U.S. Supreme Court, he was aggressively pressed for his position on abortion and Roe, to which he provided diplomatic non-answers, as is routine for federal judge appointees.

Verdict: Still a wild card, but evidence hints that he might uphold Mississippi’s 15-week abortion ban with the middle ground option.

Thomas has ruled ideologically right in every abortion-related case before him.

The longest seated jurist on the current Court, Justice Thomas’ record is perhaps the most absolute when considering whether he’d overturn Roe, since he in fact did rule to overturn Roe when given the chance. Thomas is the only justice on the current Court who was also seated during the 1992 Planned Parenthood v. Casey decision, for which he ruled in the minority.

Thomas opposes the Roe and Casey precedents — and enthusiastically so. In June Medical v. Russo, a win for abortion advocates, Thomas dissented and said of abortion precedents:

“But those decisions created the right to abortion out of whole cloth, without a shred of support from the Constitution’s text. Our abortion precedents are grievously wrong and should be overruled. Because we have neither jurisdiction nor constitutional authority to declare Louisiana’s duly enacted law unconstitutional, I respectfully dissent.“

Considered moderately liberal, Justice Breyer, the eldest of the justices, has ruled ideologically left in every abortion-related case before him.

Like Thomas, Justice Alito has ruled ideologically right in every abortion-related case before him.

While a federal judge on the Third Circuit Court of Appeals, Alito was one of three judges to rule on Planned Parenthood v. Casey (before the case was heard by the Supreme Court). Alito was the lone dissenter in an overturn of the spousal notification portion of the law being challenged.

Alito also expressed personal opinions about abortion, particularly about Roe, before his career as a federal judge. In a 1985 memo, he said,

“We should make clear that we disagree with Roe v. Wade and would welcome the opportunity to brief the issue of whether, and if so to what extent, that decision should be overruled.”

While this quote does not provide an absolute current position taken by Alito, it does reinforce the rest of his reputation towards abortion and Roe. To be fair, Alito is also on the record as having acknowledged that Roe is precedent. But in the same fairness, these remarks were made during his confirmation hearing to the Appeals and Supreme Court where any appointee will refuse to give their position on a judicial matter.

The anchor of the Court’s left bloc, Justice Sotomayor has ruled ideologically left in every abortion-related case before her.

A constant supporter of abortion, Sotomayor has been less than shy in her dissents. In a 5-4 decision last September, the Court refused to interfere with the Texas heartbeat law, effectively upholding it. In her dissent, Sotomayor said,

Though the Court later decided to hear the case, Sotomayor gave a strong statement of opposition towards her juristic colleagues in reference to the Court’s original denial of injunctive relief. While addressing law students via virtual appearance, Sotomayor said,

“You know, I can’t change Texas’s law. But you can, and everyone else who may or may not like it can go out there and be lobbying forces in changing laws that you don’t like.”

Verdict: Given her opinions, and the reasons for them, Justice Sotomayor is very likely to rule against Mississippi’s 15-week abortion ban.

Similar to Justice Breyer, Justice Kagan is a moderate on the Court’s left bloc but has ruled ideologically left in every abortion-related case before her.

During the oral arguments for the Texas heartbeat law challenge, Kagan expressed her opposition to the law but also affirmed the Court’s precedent:

“The actual provisions in this law have prevented every woman in Texas from exercising a constitutional right as declared by this court … That’s not a hypothetical. That’s an actual.”

Justices Gorsuch and Kavanaugh have much shorter records to analyze on abortion, though both have ruled ideologically right in every abortion-related case before them.

Gorsuch, while on the 10th Circuit Court of Appeals, ruled on a unique string of abortion-related cases, though none that address the Roe precedent.

Off the bench, their personal opinions on abortion are also limited and not directly related to Roe.

For a clarifying point about Kavanaugh, many who opposed his appointment to the Supreme Court alluded to a 2003 email between Kavanaugh and James C. Ho, then-Chief Counsel for the Senate Subcommittee on the Constitution, Civil Rights, and Property Rights. An excerpt from the email reads,

“I am not sure that all legal scholars refer to Roe as the settled law of the land at the Supreme Court level since Court can always overrule its precedent, and three current Justices on the Court would do so.”

The email does not provide any substantial reason to suggest that Kavanaugh, who was working in the Bush Administration at the time, would overturn Roe, despite what his critics said of the email during his 2018 confirmation. Still, Kavanaugh was clear that precedent is not as concrete as perhaps Chief Justice Roberts would hold. So, if Kavanaugh did have reservations about overturning Roe, we can likely eliminate precedent as his hesitancy.

The three justices Kavanaugh was likely referring to were Thomas, Scalia, and Rehnquist considering they were the only three justices on the Court in 2003 who ruled to overturn Roe in Planned Parenthood v. Casey in 1992.

Verdict: It is likely that both Justices Gorsuch and Kavanaugh will rule to uphold Mississippi’s 15-week abortion ban. Whether they’d take the middle ground option or overturn Roe is not clear.

The newest of the justices, and the youngest woman ever appointed to the High Court, Justice Barrett has ruled ideologically right in every abortion-related case before her — but it’s worth noting the secondary nature of abortion in these cases.

While on the 7th Circuit Court of Appeals, Barrett ruled on cases where abortion was secondary, including the disposal of fetal remains and whether abortion on the basis of race, sex, or gender is lawful. Barrett also favored a ruling that would require doctors to inform parents of a minor seeking an abortion.

While on the Supreme Court, Barrett has only had the opportunity to grant or deny injunctive relief when opposition tried to halt the Texas heartbeat law, which she refused along with Justices Thomas, Alito, Gorsuch, and Kavanaugh.

Despite her minimal ruling history on abortion, there is reason to believe Barrett is pro-life. In 2006, Barrett and her husband Jesse endorsed an advertisement with Right to Life St. Joseph County that condemned Roe v. Wade. In 2008, Barrett co-authored a journal entry for the Notre Dame School of Law which stated that abortion “is always immoral.” When questioned about this publication during her confirmation hearings, Barrett said that she and her co-author were referencing the standard of the Catholic Church’s teachings and said that if she was confirmed, her faith would have no influence “on the discharge of my duties as a judge.” While this could sound as if her pro-life position is dormant in her jurisprudence, it is crucial to remember the normalcy of neutral answers during confirmation hearings.