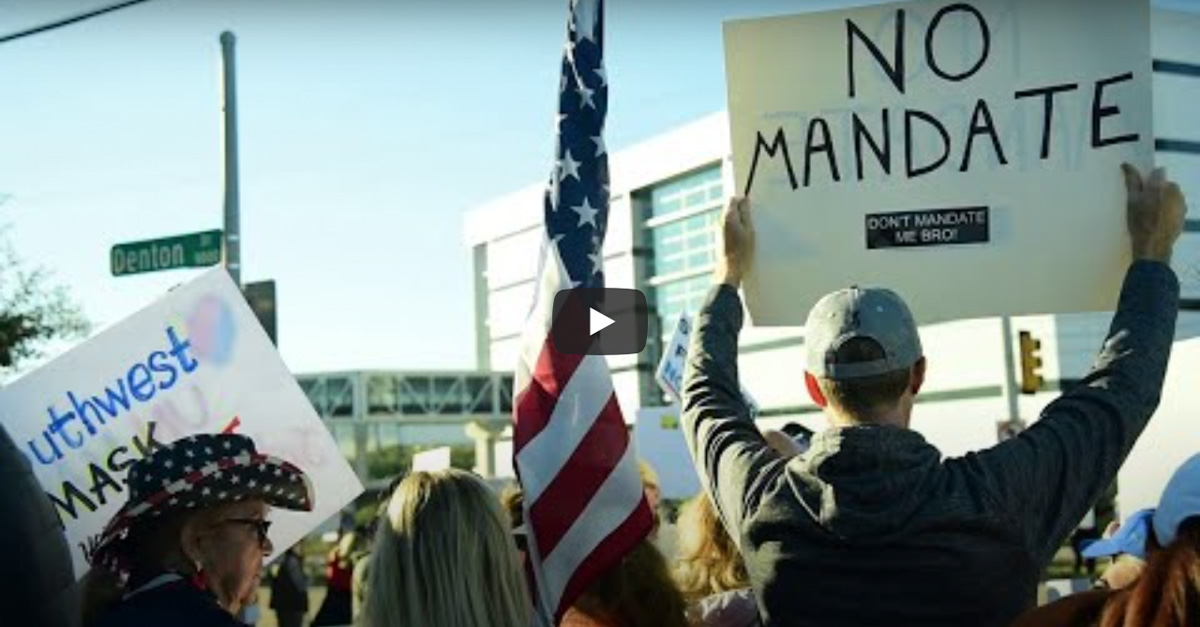 The “Freedom Flu” fighters have gotten the upper hand. Southwest Airlines has officially announced that they have canceled their previously issued plan to put unvaccinated staff on unpaid leave starting in December. This morning, the banner line on the incredibly popular news aggregator The Drudge Report read: “Southwest Caves on Unvaxxed”

According to CNBC, “Southwest Airlines has scrapped a plan to put unvaccinated employees who have applied for but haven’t received a religious or medical exemption on unpaid leave as of a federal deadline in December.”

This is a significant change from the company’s previously issued policy. “Initially, we communicated that these Employees would be put on unpaid leave and that is no longer the case,” officials wrote in a statement.

This comes on the heels of hundreds of Southwest employees showing up outside of the company’s Dallas headquarters Monday morning to protest the vaccine mandate. Employees claim the airline is violating their personal rights by giving into this vaccine mandate.

Last week, I wrote that whatever happened in the Southwest saga of thousands of grounded flights and rumors of pilots protesting the vaccine mandate with the “Freedom Flu,” it was a much-needed moment of inspiration. That, hopefully, with the people pushing back, Southwest — and other companies — would come to their senses and begin to respect personal medical freedom and bodily choice on the COVID-19 vaccine.

I noted, “For a weekend, even as flights were grounded, spirits soared. Millions of Americans were inspired simply by the thought that a critical mass of employees took a stand against the unlawful, unconstitutional Biden administration vaccine mandates. It’s been a moment of moral inspiration and a shot of much-needed courage into the veins of our republic.”

Sure enough, the movement made a difference.

The cause for all this division between Southwest and its employees is the Biden Administration’s forthcoming mandate that all private businesses with over 100 employees must require workers to either be vaccinated or undergo COVID tests at least weekly. This mandate, which will be issued and enforced by the Department of Labor, comes with an aggressive enforcement mechanism: up to $14,000 in fines per violation.

Southwest, as a federal contractor, has said that they feel like they have no choice but to comply. Southwest CEO Gary Kelly even acknowledged that the mandate is a real issue. Speaking to CNBC about it, he said:

However, with their disastrous weekend, and tens of thousands of angry customers, it appears that the push-back and “sick-outs” undertaken by their employees in protest have made them change course mid-flight.

According to The Hill, a spokesperson for the company said, “Southwest acknowledges various viewpoints regarding the Covid-19 vaccine, and we have always supported, and will continue to support, our employees’ right to express themselves, with open lines of communication to share issues and concerns.”

Where this goes from here for Southwest employees remains to be seen. But for now, it’s obvious that the protests and pushback have made a difference.

That’s because Southwest employees are just one example of courageous Americans pushing back on the unconstitutional vaccine mandates that have swept across our nation.

Republican Congressman and conservative hero Jim Jordan recently tweeted out a good summary of some of the higher-profile dissenters:

Rep. Jordan is right: Freedom is contagious. As is courage. More and more businesses are waking up to the fact that what the Biden Administration is demanding of them is morally reprehensible.

As our nation faces a major labor shortage, and increasing inflation, the vast majority of businesses can’t afford to have their employees walk out, or suddenly catch the “Freedom Flu.” Therefore, what they are banking on is mass compliance, a “no questions asked, no protest given” attitude. Thankfully, millions of Americans are rising up.

For example, a popular burger chain, In-And-Out, recently had one of its locations in San Francisco shut down for refusing to check customers’ vaccination status, as required by a local mandate. But, channeling the same spirit as the Southwest employees, In-N-Out’s Chief Legal and Business Officer Arnie Wensinger said in a statement that they “refuse to become the vaccination police for any government…It is unreasonable, invasive, and unsafe to force our restaurant associates to segregate customers into those who may be served and those who may not, whether based on the documentation they carry, or any other reason.”

More of this, please. More protests. More walk-outs. More refusals to comply with the mandates. Quite frankly, it is our patriotic duty to engage in noncompliance with unlawful mandates like these.

It’s truly horrific to see how the unvaccinated are already, and increasingly, being treated like “second class” citizens in the United States — not unlike the “Untouchables” in India. Reports are coming in around about hospitals denying the unvaccinated critical health care like organ transplants. The time to stand, and fight, is now.

These mandates are profoundly un-American. Yes, COVID poses a health threat. But America was founded on the principle of liberty, not safety. As Founding Father Benjamin Franklin has famously said, “Those who would give up essential Liberty, to purchase a little temporary Safety, deserve neither Liberty nor Safety.”

Vaccines should be a personal choice. If you want to get one, go ahead. But the federal government has no right — no authority — to tell private businesses that they must force their employees to be vaccinated or face penalties. In order for the companies to have the courage to stand up to the Biden administration, their employees must stand up to them first. Thankfully, that is what is happening. The dominoes are beginning to fall. The dam is beginning to burst. Let’s all hope that freedom flows out and washes back over our nation as swiftly as possible.