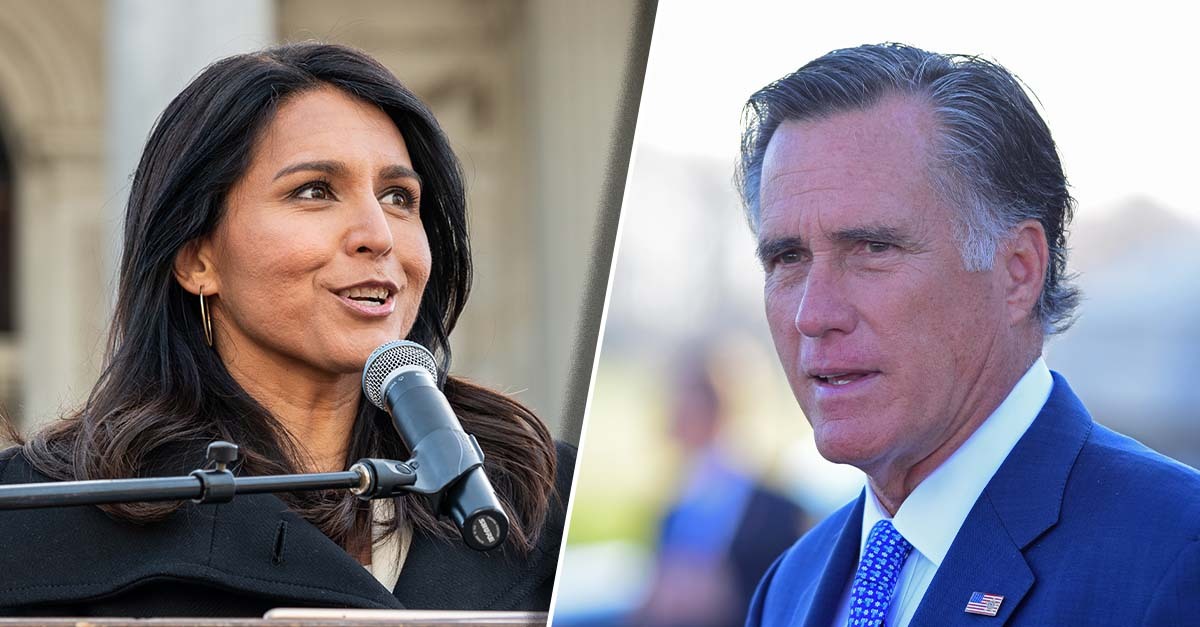 Hey Mitt Romney, first take the log out of your own eye

What was Gabbard’s treason? She appeared on the Tucker Carlson Show to discuss Undersecretary of State Victoria Nuland’s unexpected admission before the U.S. Senate Intelligence Committee that there are biological research facilities in Ukraine. During her appearance, Nuland testified, “We are now quite concerned Russian forces may be seeking to gain control of [the biolabs]. So we are working with the Ukrainians on how they can prevent any of those research materials from falling into the hands of Russian forces, should they approach.”

While discussing this remarkable admission on Tucker, Gabbard, a former presidential contender who served in the Iraq War and is currently serving as a lieutenant colonel in the U.S. Army Reserves, stated that “there are 25-plus U.S.-funded biolabs in Ukraine which if breached would release and spread deadly pathogens,” including anthrax and botulism, to the U.S. and the world. She also called on the Biden administration to immediately broker a cease-fire between Russia and Ukraine in order to secure those labs and pathogens. In a Twitter thread, she cited other officials and agencies that have verified the existence of the biolabs containing the pathogens and toxins.

For your average viewer, Gabbard’s request probably sounded more than reasonable, given that the entire world is just coming out of a deadly pandemic involving a virus that many believe was engineered to be more contagious and more lethal in a biological research lab. Most people wouldn’t view such a suggestion as “playing into Putin’s hands.”

But Mitt Romney is not most people. Instead, he took these comments as “treason,” and many members of the media followed his lead, including the ladies of “The View.” Ten years previously, during Romney’s presidential bid, they had mockingly accused him of being a misogynist, an elitist, and a dog abuser, among many other character flaws. But in this moment, they were more than happy to swoon over his charge against Gabbard and take it to the next level.

Gabbard, they insisted, should be investigated by the Department of Justice (Tucker Carlson, too, for that matter) for being “Russian propagandists” and “shills for Putin” who spread “Russian false flag information.”

“Who is this woman?” Ana Navarro demanded to know, before describing Gabbard as someone who only exists on Twitter. “The fact that we’re giving her oxygen is what makes her relevant, that we’re talking about her on Hot Topics.” Whoopi Goldberg chimed in by exclaiming excitedly, “They used to arrest people for doing stuff like this…they used to actually investigate stuff like this!”

First of all, questioning government policy or repeating facts first cited or published by official government officials is not a crime, much less treasonous. But since Romney seems to think so (or at least wants people to believe it is), he might also hope that such a charge is never applied retroactively since Romney himself is on record for criticizing America’s foray in Vietnam while troops were in harm’s way. And Romney also publicly repeated official government statements on the existence of weapons of mass destruction during the run-up to the Iraq War (an assertion that ended up not being true).

Let’s go back some 50 years or so to 1970, when one William Mitt Romney discussed his thoughts with the Boston Globe on the government’s handling of the Vietnam War. He stated, “I think we were brainwashed. If it wasn’t a political blunder to move into Vietnam, I don’t know what is.”

Back then, Romney was a 23-year-old college student who had already received several student deferments that kept him from being drafted and sent to the frontlines in Southeast Asia. But that status is not what made the reporter reach out to him for his opinion. Romney’s father, George Romney, was then serving as secretary of Housing and Urban Development (HUD) for the Nixon administration. Young Mitt, like the children of other Nixon officials, had serious reservations about the war and wanted the world to know exactly how he felt, as the title of the article, dated May 31, 1970, announced: “Nixon appointees silent, but — Cabinet kids against the war.”

Now, there is no question that Russian president Vladimir Putin is a very bad guy. But so was North Vietnam’s president Ho Chi Minh. The communist leader sent his guerilla forces, the Vietcong, to attack the then-nominally democratic republic of South Vietnam, a move that drew in the U.S. and eventually led to the deaths of 58,000 Americans and more than 2 million civilians on both sides of the conflict. Moreover, Ho Chi Minh’s henchmen viciously tortured American servicemen held as prisoners of war, including Romney’s eventual competitor for the 2008 GOP presidential nomination, the late Sen. John McCain, R-Ariz.

The anti-war comments of Romney and other relatives of high-ranking government officials were almost certainly used as propaganda by the North Vietnamese, particularly as a way to demoralize POWs. Their remarks may have even cost lives.

But should Romney the college student have been charged with treason and jailed over it? Did saying that his government had “brainwashed” the country make him pro-Ho Chi Minh and a shill for North Vietnamese propaganda? Should he have been illegally targeted, investigated, and surveilled by the FBI, as director J. Edgar Hoover ordered done on a number of anti-war dissenters, among them Democratic Sen. Wayne Morse, who was deemed a subversive simply for voting against the Gulf of Tonkin Resolution that ratcheted up America’s combat operations in Vietnam?

Of course not. The young Romney was merely expressing his opinion — right or wrong. As with most opinions, this one was popular with some, repugnant to others, and ignored by most. But unlike the children of government officials in North Vietnam, who would most certainly have been taken out and shot for saying something so critical, Romney had every right to speak out as an American citizen. Now some anti-war Americans went beyond protesting, with a few, including actress Jane Fonda, going so far as to travel to North Vietnam and provide aid and comfort to the enemy, but there’s no evidence that Romney ever did anything other than talk about the war. There is absolutely no evidence that Tulsi Gabbard has ever done anything other than talk about Ukraine either — although if the U.S. happens to go to war with Russia, she, as an Army Reserve officer, will probably be sent to Eastern Europe to serve in a war zone, something that no one else railing in this article about treason and propaganda and investigations is likely to do.

A moral and constitutional failing

From a moral standpoint, Romney should apologize to Gabbard for falsely accusing her of treason and slandering her in such a vicious way and giving others license to do the same.

But Romney should also ask God’s forgiveness, as he is in violation of the warning in Matthew 7:1-5, ESV, in which Jesus calls out those who self-righteously judge others for what they themselves have done or are doing:

From a constitutional standpoint, though, Romney might seriously consider resigning as Gabbard has publicly called him to do. Romney, like so many of our current elected leaders, seems to lack a clear understanding of or respect for the First Amendment and the benefits of debate and dissent to a free, truth-seeking society. Just as anyone who questioned COVID policy was smeared as “anti-science” or “anti-vax,” anyone who questions American policy in aiding Ukraine or who expresses concern about the specter of a wider conflict that could result in the use of American ground troops or nuclear or biological weapons is somehow “pro-Putin.” And Sen. Romney, once respected as an elder statesman, has jumped on board that crowded safe-space of a wagon with a vengeance.

We are at a dangerous point in American society. Do we as Americans have free speech or not? Are we destined to become a nation of narrative pushers and virtue signalers rather than critical thinkers and orators and debaters? Have we become so weak as a people that we cannot handle hearing an opinion or an idea that is different than our own or is not popular or is not approved by the right people? And if Americans are threatened with prison for speaking out against their government’s actions and policies, exactly how are those cheering it on any different from Putin, who has spent the last three weeks throwing his own outspoken dissenting citizens into prison.

The truth is that what Romney and the ladies of The View said is more likely to undermine our country’s stability and democratic foundations than anything Gabbard has said. For as President Theodore Roosevelt once said, “To announce that there must be no criticism of the President, or that we are to stand by the President, right or wrong, is not only unpatriotic and servile, but is morally treasonable to the American public.” The same applies to all of our government authorities, but especially those who write and implement our foreign policy, as they hold immeasurable power to determine the fate of American lives, the nation’s security interests, and the world’s stability.

So let Tulsi Gabbard speak freely, Mitt Romney, and in the meantime, take that log out of your eye. You just might find you can see a little more clearly. 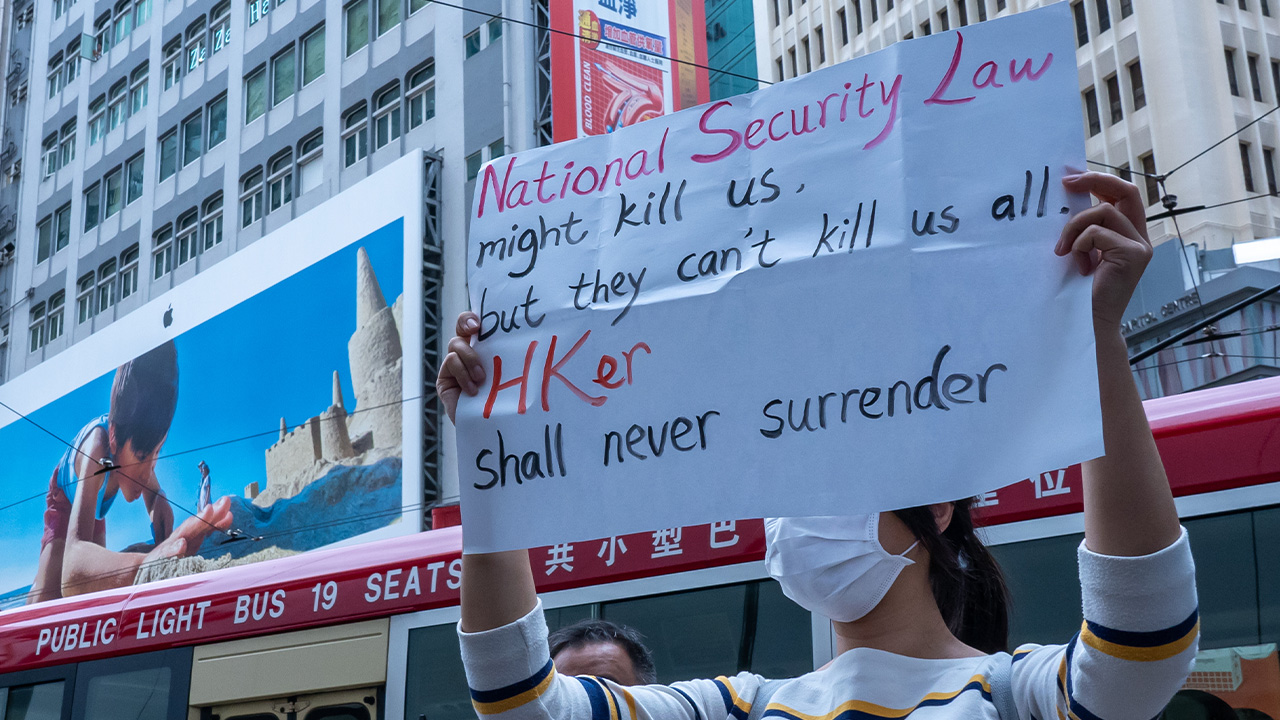