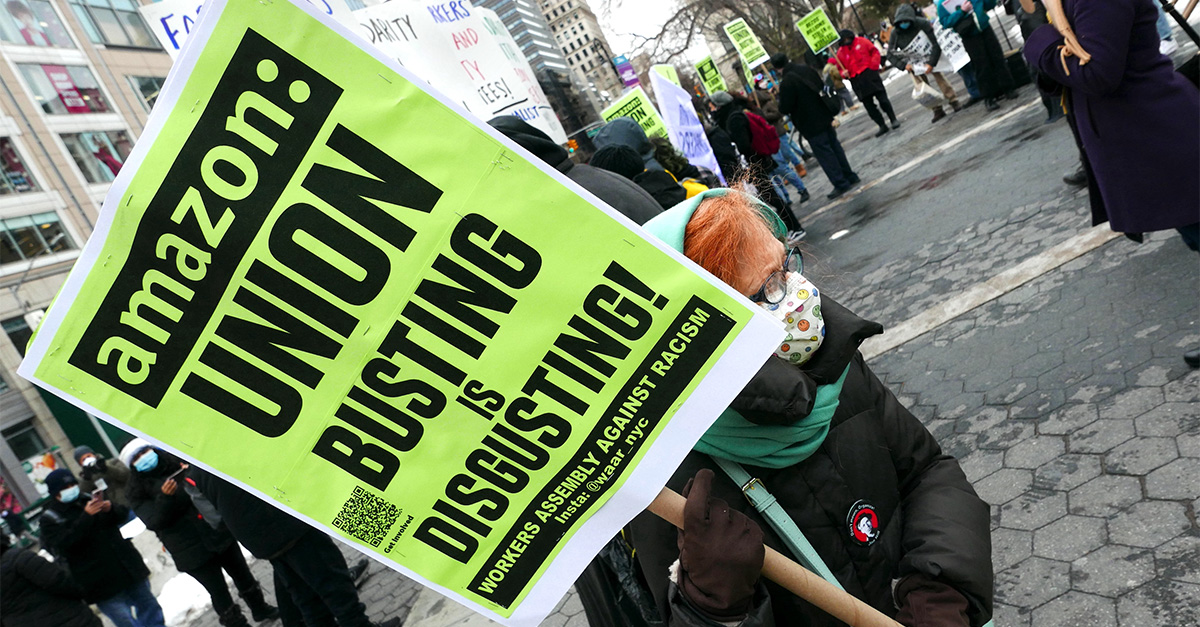 Last week, the biggest unionization attempt in the 26-year history of retail giant Amazon fell flat when just 16 percent of the workforce at the company’s fulfillment center in Bessemer, Alabama, voted not to organize, with 1,798 workers voting “no” to joining the union and just 738 voting yes.

In a statement, Amazon graciously insisted that this was no victory for them, but rather the “choice” of employees not to unionize. “It’s easy to predict the union will say that Amazon won this election because we intimidated employees, but that’s not true,” the company said in a statement. “Our employees heard far more anti-Amazon messages from the union, policymakers, and media outlets than they heard from us. And Amazon didn’t win — our employees made the choice to vote against joining a union.”

Amazon expressed an awful lot of confidence in a workforce they have been accused of aggressively trying to intimidate out of voting to unionize.

During the “free and fair vote,” Amazon also seems to have gone through every ballot with a fine-tooth comb, contesting hundreds of them. As a result, it took more than a week to certify 2,500 votes.

The AP noted that “in order to determine a winner, the margin of victory” would have to be “greater than the number of contested votes, otherwise a hearing would be held on whether or not to open the contested votes and count them toward the final tally.”

The Retail, Wholesale, and Department Store Union (RWDSU) has since appealed the results, with President Stuart Appelbaum bluntly stating, “Our system is broken, Amazon took full advantage of that, and we will be calling on the labor board to hold Amazon accountable for its illegal and egregious behavior during the campaign. But make no mistake about it; this still represents an important moment for working people and their voices will be heard.”

At the Standing for Freedom Center, we’ve done a lot of pontificating about the hypocrisy of woke corporatists when it comes to the policies they opt to publicly oppose while seemingly taking a very different view when it comes to comparable policies within their own businesses.

Amazon has publicly supported Black Lives Matter and other anti-racism efforts. Yet its top executives went out of their way to intimidate a group of largely minority workers, even publicly suggested that those same employees were lying about their work conditions. Moreover, Amazon appears to have astoundingly little curiosity about the degree to which its Chinese partner companies are involved in reported human rights violations against minorities, including those that have developed facial recognition technology used to surveil the Uighur Muslims in China or those whose products are made or sourced using slave labor.

Amazon founder Jeff Bezos owns The Washington Post, a storied newspaper that has become even more famous for its tagline, “Democracy Dies in Darkness,” and yet the speech and actions of the executives he employs and the companies he runs routinely encourage and enable censorship and digital book-burning. Amazon itself has banned books that engage in healthy intellectual debate about the transgender movement, as well as books and documentaries about other “controversial” topics and figures, including a sitting Supreme Court justice. Moreover, Amazon Web Services overnight threw the popular social media platform Parler off of its hosted servers, effectively silencing millions of users.

Then there is the issue of election integrity. Like other corporations that “care,” Amazon went on the record in opposition to any legislation that reforms or better secures election processes, including the law passed in Georgia by a duly elected legislative body and a bill currently pending in Texas.

Unfortunately, Amazon executives now have their very own mini-version of an election with which we can scrutinize the degree of their hypocrisy.

And boy, will this make you see red.

First, it’s important to understand the background of the Amazon vote: The Bessemer facility is just a year old, and an estimated 85 percent of the employees who work there are black. In what would be a first for Amazon warehouses anywhere in the U.S., these workers said that they wanted to unionize to gain protection from what they considered mistreatment and abuse. The employees accused Amazon of surveilling them on the job, implementing harsh packaging quotas, and ignoring workplace injuries.

Some employees and delivery drivers even reported that they are provided so little time on breaks that they have to urinate in bottles. Their complaints were substantiated by British author James Bloodworth, who went undercover at an Amazon fulfillment center in 2018 and saw workers being scolded for taking bathroom breaks and noted that there numerous bottles of urine lying around.

In the run up to the union vote, Jeff Bezos, founder of Amazon and the world’s richest man, essentially called the Bessemer workers liars, tweeting: “You don’t really believe the peeing in bottles thing, do you? If that were true, nobody would work for us. The truth is that we have over a million incredible employees around the world who are proud of what they do, and have great wages and health care from day one.”

Meanwhile, in the months leading up to the vote, workers charged that the company daily sent out anti-union emails, even intimating that some workers would be laid off or the entire warehouse shut down if the union vote succeeded. “When it comes to this union busting, it’s severe. We’ve never seen anything like it on this level,” said Joshua Brewer, a RWDSU organizer.

The Guardian reported at the time that Amazon was appealing a ruling made by the National Labor Relations Board (NLRB), which had permitted 5,800 employees at the warehouse to cast their ballots by mail to determine whether they would be represented by RWDSU.

This was while Alabama was still in the thick of a major COVID-19 outbreak. While the NLRB has typically preferred manual voting, The Guardian noted that since the onset of the pandemic, 90 percent of all union election representation cases they presided over were conducted by mail-in voting.

Fast-forward to last week: Amazon spokesperson Jay Carney, who served as press secretary under President Barack Obama and communications director to now-President Joe Biden when he was serving as Vice-President, issued a scathing rebuke of Georgia voting law changes, as well as similar proposed legislation in Texas, which he pointedly declared were designed to undermine the voter rights of minorities.

In a statement posted to Twitter as the Texas State Senate passed a bill that would place similar limits on mail-in voting as Georgia has done, Carney rebuked legislation that he believes is legislation “aimed at restricting the ability of Americans to vote.” He later wrote,

“It has been fifty-six years since the Voting Rights Act became law, yet efforts to disenfranchise Black people and other minorities continue to this day. The ability to vote is one of the most prized fundamental rights in our American democracy, and Amazon supports policies that protect and expand those rights.”

Delta, Coca-Cola, and Major League Baseball are among those organizations that have publicly rebuked the new voter laws after public pressure to do so from activists.

I’d be remiss if I fail to neglect to mention as well that at the time Amazon was working to block its workers from sending in mail-in ballots for the union election, the nation was in the midst of a massive uproar over the results of the 2020 presidential election. And I’m sure I don’t have to tell you that the integrity of mail-in voting was a factor.

And yet, when the union votes were coming in, Amazon took great pains to closely scrutinize them, making sure that every single ballot belonged to someone who was eligible to cast it. Apparently, there was a lot of attempted fraud, because Amazon contested and sought to block hundreds of ballots.

Amazon’s inexplicable decision to boot free speech (and decidedly right-wing) social media outlet Parler off of its servers in the wake of the January 6 riot on Capitol Hill without any evidence that violence had been planned on the platform indicated that the corporation (no stranger to openly espousing progressive views) had taken the position that the election had been entirely secure — even with the historically expanded use of mail-in ballots and all of the other changes to voting requirements and vote counting processes made unilaterally by some state election boards to accommodate the unexpected pandemic and its resulting lockdowns.

Yet at the very same time, Amazon was working to block workers from sending in their union ballots via mail and making sure that votes were cast with the utmost integrity.

If Amazon genuinely believed that mail-in voting and less oversight empowers the people on whose vote policy and leadership will be determined, then they are clearly trying to disenfranchise their own workers in Bessemer, Alabama, the vast majority of whom are black.

And if they genuinely believed that elections conducted with mail-in ballots and less oversight is fully secure — as Twitter insists — then by their actions they have shown themselves to be liars and they are merely virtue signaling their allegiance to the autocracy of woke corporations that are getting way too comfortable playing cultural politics and interfering in government policy — certainly more comfortable than any freedom-loving people should accept.

Either way, to say that Amazon is almost indescribably hypocritical and clearly lacking in any moral integrity or consistency would be a massive understatement — but hopefully an understatement that Amazon and its woke corporate cronies won’t find a way to censor. 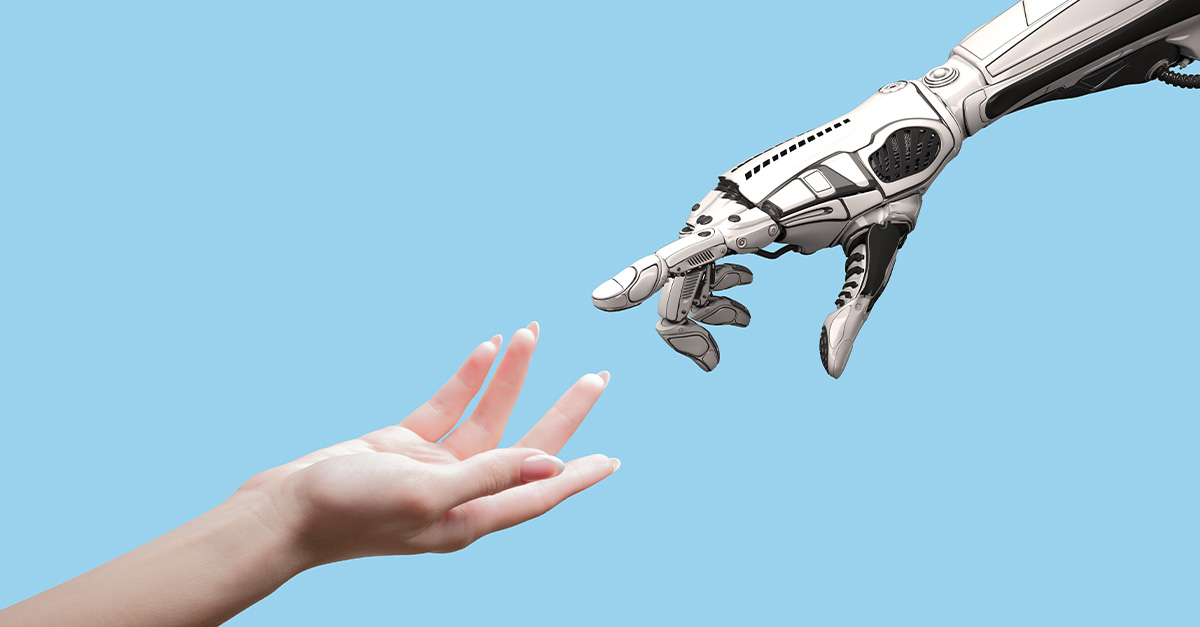