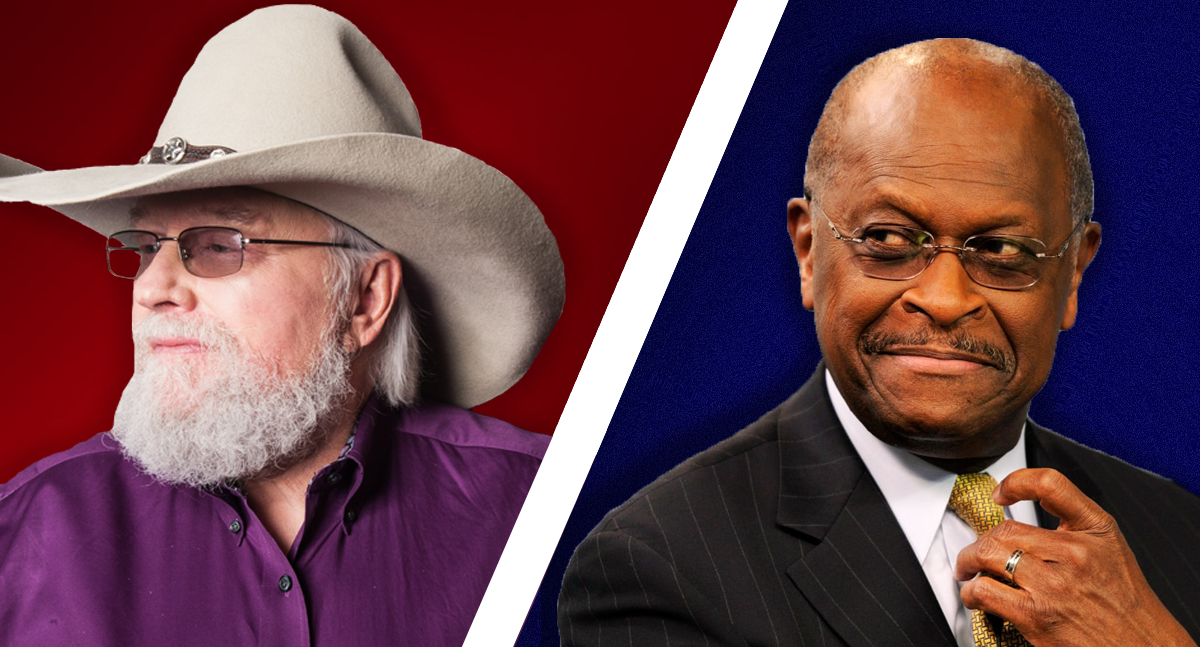 There were both notable differences and similarities between these two men, but both were inspiring examples of driven, faithful, principled men who exemplified the American dream, and the American spirit.

Their respective backgrounds are two that are often archetypically pitted against one another.

Daniels was a white Southern man born decades before the Civil Rights Act while Cain, nearly ten years Daniels’ junior, was a black man from Georgia who grew up in the Deep South in the days of Jim Crow.

While Cain was a prolific businessman who rose up the corporate ladder, Daniels was a gifted musician who rose up in the ranks in the Nashville music scene, going on to play with some of the most influential musicians of his day.

Different backgrounds and different paths, but, as devout men of faith and Americans with the simple, powerful values that have always made our nation great, both displayed the same drive and spirit.

Despite their obvious racial differences, however, both destroyed stereotypes that have become all too commonplace in the era of “woke”. While many progressives have never been more determined to highlight the differences between white and black Americans, it is poignant and inspiring to examine how these two seemingly different men both displayed courage and conviction that outshines any intersectional classification modern culture may try to shove them into.

In the 50s, before either the Civil Rights movement or his legendary music career would take off, Daniels stood up for racial equality in a small but significant way by simply taking a stand for what was right at great personal risk.

As the Daily Caller noted after his passing, Daniels wrote in his memoir, “Never Look at the Empty Seats,” that he and his father stood up for a black co-worker who should have been working over them but was neglected for promotion by the company due to the color of his skin.

“I was training under Louis Frost, who years before had trained my daddy and knew ten times more about the job than I ever would. I was technically his boss, but I should have been working under him and was in every way but my title. Louis had one problem: he was black,” Daniels wrote.

Daniels recounted what happened when the company began laying off workers in the summer of 1958: “Guess who they were going to lay off in my department? My black coworker Louis Frost, who knew ten times more about the job than I did or ever would.”

“The corporate decision was made on race alone, and it just wasn’t right. In fact, as is the case with most of these kind of decisions, it was downright bad business,” Daniels wrote in his memoir.

He said he told his boss: “Lay me off. I’ve got another job.”

Daniels went on to devote himself to his music career, while Frost, with the senior Daniels’ help, landed a salaried position.

“The result was that Louis got the job, went on straight salary, and worked there until he retired many years later,” he wrote. “I’ve always been proud of my daddy for having the courage to do the right thing.”

Cain, meanwhile, was born to working-class parents in the Jim Crow south. By today’s progressive worldview, young Herman couldn’t possibly be more disadvantaged. While the Daniels’ friend Louis Frost, who also applied himself and worked hard, earning himself sympathetic advocates, Cain, with the help of his parents’ work ethic and Baptist values, also forged his own path.

Born in Memphis and raised in Atlanta, he grew up poor. His father worked as a chauffeur, barber and janitor while his mother was a maid. They lived in a duplex, “half a house” as he always joked. Despite the challenge of growing up in the civil rights-era Deep South, he studied and worked hard to overcome. After graduating from Martin Luther King, Jr.’s alma mater, Morehouse College, with a degree in mathematics, he joined the Navy as a civilian at Dahlgren, Virginia and served as a ballistics analyst – a literal rocket scientist. Next he climbed the corporate ladder: Coca Cola, Pillsbury, Burger King and eventually the CEO of Godfather’s Pizza. Leadership posts as President of the National Restaurant Association and Chairman of the Federal Reserve Bank of Kansas City followed.

Cain would go on to be one of the key figures in the Tea Party movement with his refreshing fiscal conservatism and narrative-busting personal history. An undeniable major influence on President Donald Trump’s campaign and subsequent presidency, Cain paved the way for small revolution against identity politics. As Black voters of all political persuasions push back against the Democrats’ long-standing habit of taking their community’s support for granted, we no doubt have Cain to thank.

One of his proudest achievements was taking on identity politics, class warfare and the victimhood mentality. He challenged the idea that a person’s race and economic class should define their politics and predicted winning a third of the black vote in 2012. Together with key allies Niger Innis, son of civil rights leader Roy Innis; Dr. Alveda King, niece of MLK, Jr.; and economists Art Laffer and Steve Moore, Cain made progress in breaking those old paradigms.

Each of these men are inspiring role models, not just for white men or black men, but for all Americans who choose to take their future into their own hands and work hard to achieve greatness, or even just goodness.

We can’t say goodbye to these great Americans without resolving to keep their memories alive by striving for a world in which more children are told that they too can be legendary country musicians, firebrand outsider politicians and entrepreneurs, or whatever else they want to be.

Cain and Daniels didn’t let their demographic designations hold them back from success or decency. No American ever should. That is what truly makes our nation great.