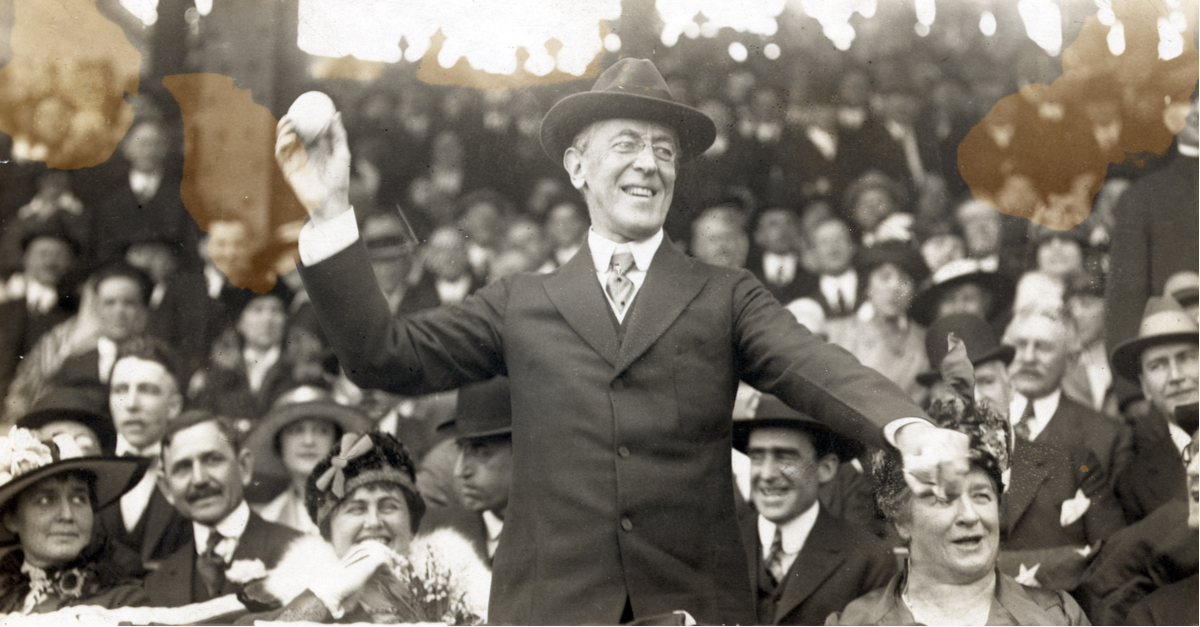 President Woodrow Wilson is arguably the most racist president in American history.

Wilson’s racism was rooted in the teachings of the 19th century German School of Philosophy. One of his primary purposes was to divide the nation along racial and ethnic lines and to use the divisions to advance his big-government agenda.

Wilson’s father, Joseph Wilson, preached and wrote in support of the South and slavery as a biblically-based institution.[i]   In 1883, Wilson began work on a doctorate in history and political science at John Hopkins University.   John Hopkins was the leading American center of scholarship on the grand ideas of the German philosophers.  The German School of Philosophy set forth the state as the guiding and shaping force of society.   Objective morality was rejected and replaced with individuals conforming to their group.  He also embraced the school’s belief in evolution and a critical scholarship, which rejected the historical accuracy of the Bible.

Wilson openly criticized the Constitution and the Founding Fathers.  In his book Congressional Government, Wilson wrote, “No doubt a lot of nonsense has been talked about the inalienable rights of the individual, and a great deal that was mere sentiment and pleasing speculation have been put forward as a fundamental principle.”

Wilson rejected the Founder Fathers’ belief that man was made in the Image of God and possesses inherent rights.  Wilson believed mankind came into being from evolution and that rights were group rights, not individual rights.  Further, he believed rights came from government and should serve the interest of the state.

Wilson wanted to transform the role of the State and would let nothing, including the Constitution, get in his way. One of the most effective tools for advancing statism proved to be group identity politics.  Wilson proclaimed on the campaign trail in 1912 that the Constitution must be Darwinian and that society must develop with the state becoming the ultimate expression of the people.

Wilson also had a romantic view of the Antebellum South.   He loved the South and identified strongly with the region.  He also held the belief that blacks should remain segregated and not aspire toward equality.   Wilson believed that evolution left African Americans and other groups inferior to white people and therefore they should conform to their lower group status.

Further, Wilson believed in the Hegelian group identity model of nations.  He believed nations and races should be built into single entities.  Wilson wanted an America which was unified around common racial and ethnic ties and rejected the idea that the values and ideals of the Founding Fathers were a proper basis for national unity.   As part of this vision, Wilson supported eugenics.

As governor of New Jersey, Wilson signed a bill that created the state Board of Examiners of Feeble-Minded, Epileptics and other Defectives.  The bill gave the state the authority to determine that procreation was “inadvisable” for criminals, prisoners, poor children and other defectives and to then sterilize the persons in question.

During World War I, Wilson tolerated widespread abuses of African American soldiers despite their heroic service to America.   Wilson removed and replaced all African Americans that held presidential appointee positions such as the Register of the Treasury.

Wilson was also hostile to non-northern European immigrants.  Wilson signed a law that banned all immigration from Asian nations. He supported legislation imposing national quotas on immigrants.  The quotas were based on the 1910 ethnic heritage of the United States.  Thus, the quotas were high for nations like England and Germany but low for all other nations.  Wilson was determined to maintain what he believed to be a proper ethnic background to the United States instead of America being a melting pot.

In 1915, the racist film Birth of a Nation was released.  The film depicted the Ku Klux Klan heroically saving the South from savage African Americans and their carpetbagger allies.  The film quoted Wilson’s racist writing.

Wilson watched a screening of the film in the White House.   Wilson praised the film as “writing history with lightning and my only regret is that it is all so terribly true.”

The Birth of a Nation fueled the resurgence of the Ku Klux Klan.  The Klan was reborn in 1915 and grew rapidly and experienced its strongest era.   The film was very popular and it served as a recruiting tool for the Klan.  World War I and the strong propaganda of the Wilson administration only further aided the Klan’s rise.  By the early 20s, the Klan is estimated to have had three to six million members across all regions of the nation.

Wilson pushed through the Espionage Act of 1917 and the Sedition Act of 1918 to suppress anti-British, pro-German and or any anti-war sentiments.  Thousands of German aliens were interned without charges.

Wilson used the war to stir ethnic divisions to use to advance his agenda.    The Justice Department under Attorney General Alexander Palmer carried raids without search warrants or probable cause.   Americans were targeted for being too culturally German or having wrong views.

Wilson also created the United States Committee on Public Information and appointed George Creel to head it.  It was popularly called the Creel Commission.  Creel created a force of 100,000 men who spread across the country giving short emotional speeches rousing the country to support the war.

German authors were purged from libraries, families of German blood were harassed, and anti-German bigotry was encouraged.  The nation was whipped into a frenzy of hate.  Creel sought to make the American people identify the federal government and the nation as one, a new view in direct contrast to the ways of the Founding Fathers.

Woodrow Wilson began a process that changed America from a society that centered on the family, church and the individual to one that was focused on all problems being solved by the government.  Central to his efforts to transform the nation was his use of group identity politics.

Today, America lives with this dark legacy as a nation deeply divided along group identity lines which have consistently been used to advance the growth of government.  America must return to the belief that all mankind is made in the Image of God and embrace God-given rights and individualism protected by the Constitution.

[i] Joseph R. Wilson, Mutual Relation of Masters and Slaves as Taught in the Bible (Augusta, Georgia: Stean Press, 1861).   (An interesting note is that despite Joseph Wilson’s open and proud defense of slavery most biographies of Woodrow Wilson ignore this fact and  I could not find a single 20th-century biography of Woodrow Wilson that mentioned his father owned slaves – even though the issue is not in dispute.